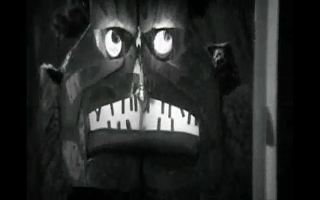 Joosep Toots was very fond of flying ghosts in the churchyard. „Say this magic spell on New Year´s Eve, in the corner of sauna,“ he explained. „Then someone hoofy will come. Our hind saw him once and described the situation: at first he stood still in the corner, doing hen´s voice — tot-tot-tot. The hind asked: how did you get here, hen? But this certain „he“ came out from his corner and terrified him. Then our hind left this place immediately and the ghost accompanied him from the door, goggling him with his burning eyes. Only a silver bullet can take him down, yeah. But at second time I myself was passing the old chapel in the churchyard. Well, I was passing the chapel and thinking about, may I receive the treasure of old Jõmm, the nobleman buried behind the corner of chapel. After digging the treasure I would buy to my mates the whitebread as much as they could eat, thought I. So, I was nearing to the chapel and listening – all quiet. Then I started to measure the building, a side was eight feet long: the first, second, third foot and there was the right place. Very well, thinking only, here I must read my spell to get the treasure. Without spell, the treasure would fall back to the underworld and take yourself along if you could not timely release its handle. But alas, there was light required, I was lighting a match but seeing a huge bone on the ground. What a carrion here, thought, it will be good if it don´t suppurate the bloody spume, rotate on my hands and cry: „Clogbone! Clogbone!“ No, I was able to use it as a jimmy and prize the wall. As working there, I was unexpectedly listening as someone scratching himself against the corner. How are you, I was asking, are you kind of scabby? And then they all came, all sorts of ghosts, buried, burned and so on and the voice ´viu and vops´ was coming with them, a sort of. I was hitting them with my breadbag and several bugaboos were getting lost so. There was one special vops, grabbing with tooth at my breadbag, this one I was also scaring away at the moment, as hitting him with my globe.“ (Oskar Luts, „Kevade“, 1913).
Posted by Aarne Ruben at 1:43 AM