Lennart Meri and Pytheas of Massalia 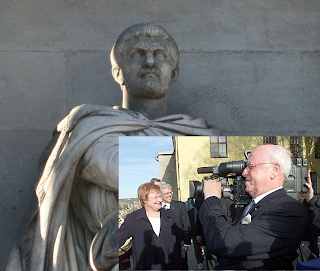 The theory of Saaremaa´s sacredness is still interesting, but mostly unverified today. This hypothesis was firstly presented by Lennart Meri, the later president of Estonia, in his book Hõbevalge (´Silvery-White´, 1976 and 1981, Tallinn). Saaremaa has been separated a little from rest of the Estonia for the centuries due to medieval notorious pirates lived there. Meri´s hypothesis is connected with remarkable historic event, the falling and impact of the Kaali meteorite (7th century BC). The radiocarbon dating of the impact site in Kaali, Southern Saaremaa determines the age of this disastrous event 698±200 BC. L. Meri accentuated that various results of the impact could have seen in the area of 1,5 million square kilometres, which presumably covered the whole Central Europe from contemporary Gorky to Bruxelles and Vienna. It thus followed that for the inhabitants of the Southern Sweden, the sun rose from North-East and seemed to set on the same place, which was against the logic of the people of those days.
Meri drew a parallel with a Greek explorer Pytheas of Massalia´s lost work „On the Ocean“ which, quoting a statement of Geminus of Rhodes, saying: „...the Barbarians showed us the place where the sun goes to rest“ (ca 325 BC). The indication of the sun´s resting place of Pytheas´ voyages sounds baiting, but both Lennart Meri´s and Karl Kello´s researches contain the same mistake – the iron mine, towards which the Romans were very enthusiastic and hunger of, was not came from Saaremaa. Most likely, it was Belerion or Priteni (contemporary North Downs – London, Reading and Brighton), and a distance, indicated by Pytheas to be a way to mysterious Thule, fitted with the route to Iceland. So the honour to be the Thuleans should be assigned to the Icelanders, not the Estonians. It was not evident that Pytheas ever visited Saaremaa, but indications of the space disaster in Estonian folklore heritage are nevertheless pretty clear.
We could find pause-making statements from The Chronicle of Henry of Livonia about ancient Estonian god Tharapita (whose name later identified as „Thor, help!“) that flew from holy Ebavere hill to Saaremaa. According to Lennart Meri, the imaginations of burning, meteorite-hit Saaremaa have pressed into the patterns of Estonian folk songs („burning Saaremaa“), Finnish runos (Saaremaa, the island of the blacksmiths and the island of Ahti) and Poetic Edda (Fenrir-myth). Karl Kello makes his consequences from Meri´s theory and goes farer. His point of view is described as emphasizing Saaremaa as the completely tabooish place of the European semiosphere. He memorizes that the second name of Kaali lake is Alue lake and ´Alue´ meant ´holy´ in some kind of proto-substrate of the Finnic-Baltic languages. Kaali crater looks like a mouth of hell and a bed of the sun at the same time. It is clan of Kalevs („the strong ones“) that has put to guard this place and according to some folktales Kalevipoeg has obliged to bear the sun on his head. He is a overloaded giant with blissful descent, whose feet could not sustain this burden. This is the reason he became an archetype of the man, whose feet constantly happened to be in the trouble. There were several historical and mythical figures, corresponding to the story of injured knees or foot joints: Finnish saint Henrik, Saint Olaf of Ringerike, Kalevipoeg, and Great Tõll, a local hero from Saaremaa. And last, but not least, Vesse (Wescelinus), Oeselian war leader in 1344, who hanged on the catapult by his foot.
According to Kello´s historical theory, there was only one defence against the strangers´ will to break hero´s knees or feet: to glance his buttock from backwards. This prevention-magic pose was common for the cultural space of the medieval Europe and was also a pose of fearless and unresponsible fool, being capable to challenge the mighties of this world and even put to doubt the existence of God. For Karl Kello, hypothetical peerage of Oeselia, called the Sun people or the hell people, had made the island „forbidden“, as the Incas hold their position in Peru or the Rangatira engages it in the Maori culture. As explaining Henry´s sentence „The venerable bishop of Riga... catechized the first of elders´ sons“, Kello hints that there was legitimate heir of the Sun people, which was simply immersed as „the Pharaoh“ and with whom no one wanted to negotiate. He might be a little boy as well. But the first of the heirs Albert wanted to baptize „devotedly“. The story remembers fate of two Inca brothers, illegitimate Atahualpa and legitmate Huáscar, whom the first was chosen by Spaniards as a negotiation partner and the second was helped by them to die.
There are several unverified elements in Kello´s theory. At first, „The Chronicle“ was not a collection of the religious enigmas, it was simply a lecture, as it read by the Order´s certain knight or its priest during the Swordbrother´s lunch times. It contained no deeper allusions, all the possibilities for them were exhausted by quoting lines of the Scripture, that was intelligible for the warriors. The Pharaoh meant the Pharaoh of Egypt. On the other hand, it was true that Oeselians had several aristocratic traditions at this time, having been carefully hidden from the circle of external nations around the Baltic Sea.
Picture: hs.fi
Posted by Aarne Ruben at 11:24 PM