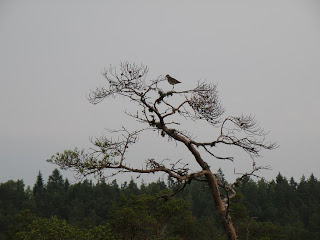 Peter, the stove-maker of Kaltenbrunn Manor (now Kalsnava), accuses, on 31 October 1692, in the Tartu District Court, Thiess, the old  (87 years) peasant of Jürgensburg, of roaming around with the devil and of being a werewolf. Peter does not, especially, go to Holy Communion, has not forced his children to do so, does not pray diligently. Peter explains that he lives in the village of Nitau (now Nitaure), where Thiess also resides, and where, every spring, Thiess has thrown grain blossoms about. All his life, Thiess has been regarded as being a bit mad, and the last few years have not brought any alleviation. Thiess has met the deceased peasant Skeistan in Hell. But this all is based upon the accusation.
While the almost 80-year-old Thiess, in turn, claims that he is good, and, as a werewolf, protects the farmers’ crops from Satan. He is God’s wolf, and has nothing to do with Satan. With his actions, he had, apparently, helped both people and animals. The Jürgensburg pastor had become ill, and had been advised to turn to old, wise Thiess. Thiess had mixed together herbs, which he had gathered from the fields, with salt, and had made both a potion and a powder out of this.
From St. Lucia’s Day (December 13th) until Christmas, Thiess had been seen coming from Hell, and with a broom that had a horse’s tail hanging from it. And with this same tail, Skeistan had, apparently, struck off his nose. Hell was located in the swamp near Lemburg. Thiess, as formerly, claims that he has no dealings with Hell, other than the fact that he went to see if his broom, as well as seeds in one bag, and wheat in another, were hanging there. And since Satan had stolen these from him, he had taken them with him. From Skeistan, he had taken a wolf’s skin, and given it to Allasch’s peasant. The ritual phrase for passing on a wolf’s skin was: ´As you, so I also.´ (Es werde dir so wie mir). Skeistan had also put on the wolf’s skin, with the men doing so in sheltering bushes. Right away, they went to prey upon small animals: lambs, calves. Thiess always boiled the meat that he caught, very thoroughly; never ever eating it raw. Thiess, the werewolf, had always gotten fire and kindling from the field-hands, who had helped him to consume all his spoils, eating it all at once, including even a calf. The biggest animals were hunted by Tyrummen, the powerful Segewold (now Sigulda) werewolf. Tyrummen died young, since God took him away — he had done a lot of harm. The Honourable Court would like to know how it is possible to drag a large animal so far, even beyond Livonia, thirty miles and more, if there is brush, ferns, and scrubland. Response — werewolf Tyrummen sometimes dragged his prey around for a whole week.
The accuser does not know why Thiess did not eat raw meat like a wolf, but Thiess knows that he did have the suitable teeth for it. The dinner had taken place in Hell, where Satan had feasted upon bags full of grain; and the werewolves, lurking at a distance, had also managed to snatch a few bites; but Satan had had his guards out, who had beaten the latter off with iron cudgels. Satan only loved to destroy the grain fields. Satan had warned Thiess and Skeistan that the whole grain crop of year 1691 would be destroyed, and so Hell’s gates remained open all that time (that was where Satan had to exit from). When Hell’s gates were closed, no one could see Satan.
Nevertheless, that year there was plenty of barley, oats, and rye, with there even being more oats than barley. And that was true for even Peter’s, the accuser’s, fields. Hell was visited on Whitsunday; Hell was also visited, on St. Lucia’s Day, by various groups of werewolves, who Thiess knew well; mostly people from Rodenpoiss and Sunzel (now Suntaži). Skeistan’s son, Skeistan Rein, had also tended to hang out with them, but he had not been trusted with the secrets of Hell. Skeistan Rein had asked, the Jürgensburg (now Jaunpils) Manor workers, where the men were, but had received only mumbled responses. Those who came out of Hell, always did so as werewolves, since it was not possible to leave Hell in any other manner. ´That place isn’t above ground, but underneath it, and the entrance is guarded by a door,´ said old Thiess.
The Tartu District Court’s verdict concerning Thiess, by Honourable District Judge Herman Georg von Trautvetter, with assessors Bengd Johan Ackerstaff and Gabriel Berger as witnesses — the investigation ascertained Thiess’s lycanthropy (being a werewolf). Thiess is to stand in the church pillory, and is to be punished with 20 pairs of strokes with a rod, at a location and time to be determined by the Lemburg parish clergyman.
(Bruiningk, Hermann 1924. Der Werwolf in Livland und das letzte im Wendeschen Landgericht und Dörptschen Hofgericht i. J. 1692 deshalb stattgehabte Strafverbanden. In: Mitteilungen aus den Livländischen Geschichte, Dorpat).
Photo: Jüri Eintalu.
Posted by Aarne Ruben at 10:17 PM