A Question for the characters of Kafka´s "The Castle" 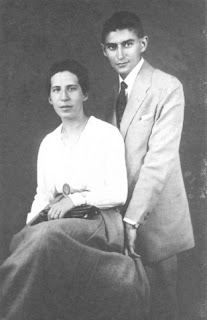 I am opening my PhD thesis with the interesting questions about the characters of the famous novel.
The narrator, K, the Land-Surveyor arrives in the village, governed by the Castle. A tanner Lasemann ("Letting Man"), whose son-in-law is the only person in the village that desired that a land surveyor be hired. He is the only person that would allow him into the Castle without his assistants. So kind persons are transversal to the direct ongoing of the plot. Thus, Lasemann vanishes.
Gerstaeker, a coachman, that outright totters on the village´s street. Despite of this shaking he can drive K wherever he wants. The typical situation for the utopias: you can leave in every directions, but your departure is in your responsibility. All directions are generally open. The names of the characters seem to be rather ironical: "Gerstaeker" means in German a very little Hymenoptera insect that lives in the barlow.
For the politologist, the main question follows: is this society sustainable?
1) Frieda confesses that Klamm ("clammy" in German) does not need her, but she, his sweetheart, needs him. The problem of the male impotency appears at very high level of the society;
2) Also, the Land-Surveyor himself struggles with the homoerotic motives (episode with the Barnabas´s shirt and sisters);
3) The nightwatch in the cancellery does not work, the ringing-devices of the phones are switched off - or, if somebody calls in at nights, there will be rather few officials awake. They switch in the devices and answer always inadeqately, because they want to joke ("the problem of the insane society");
4) The assistants WOULD replace K in the dangerous and problematic situations (i.e episode in the Castle´s yard, with the cognac). They WOULD, actually they do not;
5) In the Castle you can speak about your salary only after one-month hard working;
About the Max Weber´s bureaucracy theory, this kind of bureaucratic system fits to the huge systems, because the signals between the highest and lowest levels are dim and utopian.
Posted by Aarne Ruben at 5:56 AM No comments: