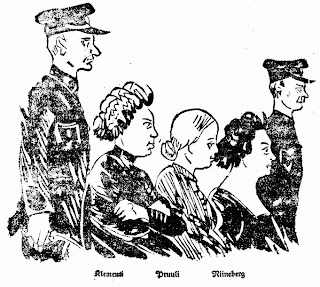 My favorite politician Jaan Santa, a representative of the Worker People´s Front was a member of Riigikogu, the Estonian Parliament, since 20th December 1920 until 20th February 1921. He was a filibuster and obstructionist, but after all he was a very quiet man.
"He is an excellent speaker when his audience consists only one or two men. If there are more people, Santa momentally ceases to speak. His best friend in Riigikogu is his colleague Reinberg, who sheds tears about his cow-cattle which remained alone after owner´s coming to the parliament."
But let him speak for himself, for his own mind:
"It once happened that representatives of the bourgeois parties forced me to reckon state´s Budget in the economical Commission. I never did it, because I know exactly which must be the worker´s administration that our bourgeois power is definitely not."
Famous young revolutionary Vilhelmine Klementi (1904-1929), second left at the picture above, speaks about Jaan Santa:
"Before he came into Riigikogu he was worker´s representative in Tallinn town council. There was also his colleague Samro whose name sounded almost the same. Santa had a red flag and Samro had a red flag. But Santa also had a red coat and long white beard!" Of course, Santa Claus!
Who else...
But let us yarn on these sweet memories about Jaan Santa. He lived in Tallinn, near Baltic railway station among the plain, almost vulgar people, but that was not actually true that he died in coup d´etat in 1924. His colleague Soans died there, but not he. As I put it in my last blog posting. We cannot even say, what happened to Santa. I constructed my hypothesis according to which Santa left Estonia and started to study in the Communist university of Petrograd, althought he was already almost fourty at this time. According to "History of ESSR" (author academician Gustav Naan) Jaan Santa was in 1953 still alive. So perhaps he lives forever.
Posted by Aarne Ruben at 5:15 AM