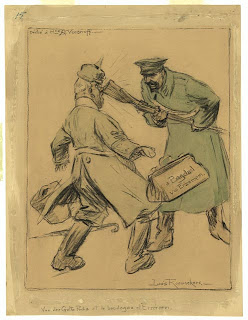 He was leader of the Baltic German Landeswehr during the Estonian War of Independence. He was commander-of chief of the VI German Reservekorps and head of the military administration of Libau city (Latvia; now Liepaja). He was an eminent enemy of the Estonian troops. He had never let himself to being insulted. He always laid first his fist on the table to back his serious pretensions against Englishmen, as he stated them to be "the most cold-ass nation in the world". Every normal human being loves and supports the Englishmen, but von der Goltz did not, because they kept insulting him in many ways. In serious ways. So, that might be happened to anyone...
In 20th May 1919 von der Goltz tried to insist his puppet officer Bermondt-Avalov, so-called general of the White Russian army unit to attack Riga with all his powers. Von der Goltz was a German count and generalmajor, while Bermondt-Avalov´s noble rank was fake and bought. As an officer and outgrower of the Preußische Kriegsakademie, general von der Goltz disgraced Bermondt, a parvenu. But Bermondt wanted to postpone attack towards Riga and therefore pretended to sleep. While von der Goltz had arriving into the castle and beginning to wait on Bermondt´s awakening, the Russian officer sent his adjunct to meet and greet von der Goltz´s adjunct. And this man said to his general:
"General Bermondt ist erschlafft. Er ruht sich aus."
Suddenly von der Goltz stood up and crossed with long steps the hall´s floor. So he went into Bermondt´s headquarters and met the adjunct again. That man tried:
"Gospodin general, tuda nelzja! Moi general spit!"
Herr Graf gave him a direct jab with his right hand and entered his colleague´s bedroom. There he grasped him from his collar, lift him from bed of his mistress and said courageously:
"Ich erwarte Ihr eine minute in meine Wagen!"
Von der Goltz, my hero! My hero of loneliness and exceptionality...
In the cartoon above the text: comrade Stalin beats Rüdiger von der Goltz in Northern Front (sorry for this curious historical shift).
Posted by Aarne Ruben at 3:33 AM