What I understand II 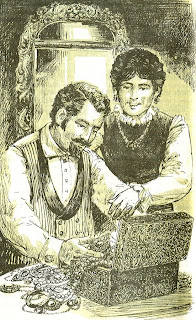 Here is the first part of "What I understand".
""Don´t be naive, leutenant. Warship would be a suicide. But I know another possibility - a ship indeed, but not a warship."
"That´s interesting!"
"Come here, Tauber," Benhausen reached out at haven map on the wall. "Look, here, in the mole´s nook is located a two-masted sailer with auxiliary motor, which I have kept track of. At first I did just in case and as you see, I was not mistaken. I have a deal with the harbour authorities that the ship in no case to be let to sea. The ship comes here with military cargo of the Temporal government and her captain is aware about that against his own will. This very ship is to me, as it´s said, a trump ace."
"With sailer to the mined sea? It would be even worser than a suicide, mister captain of the first class," Tauber wondered.
"Draught of this ship is only about couple of feet long and this do not hinder her to sail even on the minefields. But why minefields while there exists a farvater, which mine lying scheme is in my portfolio," said Benhausen and smiled, self-satisfying.
Tauber got all the information at this very moment.
"By the way, leutenant Tauber, you are not obliged to participate in this sea journey."
"What? But who is obliged?"
"I and some passengers."
Tauber´s face brightened up. The risky adventure, planned by Benhausen, was not for him. The change on leutenant´s face did not remain hidden for captain.
"And now listen me attentively," Benhausen said and went to back of his worktable. "You, leutenant, must go immediately, as soon as our conversation ends to the trade haven and find skipper of the motor sailer "Skol". In case he is not in his ship, you can find him from some seaport inn. Explain him, that he has opportunity to get out from city, but only in case, when he picks up onboard some passengers and their luggage. But he should know that the passengers leave Petrograd secretly. If ship has not enough the fuel, she got it in the same evening. The fuel will be bringing out by a tug-boat, which also going to carry the ship out of harbour. I have agreement for anything and for the execution of all this is responsible an officer of Admiralty, of course - incognito. It´s not necessary to warn you, that you must fulfill your mission without officer uniform."
For giving time to digest all that to his subordinate, Benhausen opened his table-chest and started to rummage inside it.
"As I understood you, mister captain of the first class, my role is therefore quite simple," marked Tauber after a minute has gone.
This has been expected by Benhausen. It means, behind indifferent look of the leutenant´s face was also hidden something else.
"Your role will begin, when you execute my order for the sailing ship."
"All that was only for introduction," thought Tauber. Now he was being interested, what would follow.
"But if we suppose, that captain of the sailing ship refuses?"
"This case is also expected. You could say only few words about revolvers and he will render down as the candlewax."
Tauber was amazed and looked at his chief.
"With such kind of weapons "Skol" just arrived to Petrograd. If that will be known, there is no strokings for captain.""
Another interesting extract about Benhausen´s actions:
"In the foggy November evening darkness two seamen met a poorly weared man, who moved from Uus-Sadama street to Narva road. As reached near the seamen, he stared them curiously, while they also looked him attentively. After doing some steps, one of the seamen stopped and, grasping from his comrade´s bushlate sleeve, whispered:
"Do you know, Yegorytsh, who was that?"
"I don´t know. Some subordinate harbour official or worker, I guess," looked the other at go-byer.
"That was Benhuzov, an officer with full captain rank, who is wanted by our staff! And now, Yegorytsh, go to headquarters and I will begin to follow him. Say them, that Sidorenko caught a dangerous bandit and tries to find out, where he´s hiding himself," ordered seaman.
"But what happens, if you mistake, Pavel Ivanovitsh?" the younger seaman. "Weather is quite dark now."
"As sure as death, I do not mistake. Face of that beast, who repeatedly polished my face with fists, I would never forget. And I am going now, othewise I will lose him."
To Benhausen also seemed seamen´s behaviour doubtful. After reaching farer he stopped and looked behind him. He mentioned, that one of these seamen tracked him. Obviously, that man has got know he was discovered and then jumped behind plank.
"God damn," murmured Benhausen, still doubting.
As reached to Narva road, he did not turn towards city-centre and went straight over horsecar tram line and peeped behind him. While moved a couple hundred meters towards Kadriorg park, he looked behind twice. The follower made himself more unnoticeable and smaller than he actually was and as mentioning this, Benhausen realized that he is indeed found and recognized.
"I must get rid of this guy," Benhausen thought and begun to look his opportunity to do it."
It is my favorite book!
At the picture above: captain Heinrich von Benhausen and his wife Balatina. Author: Erik Vaher, copyright by edition Eesti Raamat.
Posted by Aarne Ruben at 5:57 AM