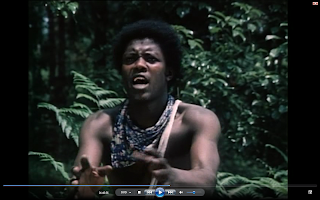 Old Rover Hank died a broken heart, and was buried beside little Kate, in graveyard, but the faithful animals dig his corpse up again. It was a sad story! Oh, it was a huge moaning of faithful animals around the open grave three days after funeral, so my pen refuses to transcribe the horrors and outrages which they all perpetrated... And then Christmas Day became like a fresh wind down, a day with semi-automatic last judgement, where all the poor, tortured negroes found their resurrection. So did the little Kate, buried right beside old Rover Hank. However, there was another negro, a certain Dick, whose master was angry Gwine Stone, a white massa known vilest in West Virginia. This alpaca-cotton-head Dick then went to graveyard and noticed strange stories happened around Hank´s grave. "Look," negro Dick thought, "dat is old Hank River. A kinda talk always washed wiz him. But why do de grave mouth open wide?"
So, my brethren, he found a horny cat from the bush beside grave. He took the cat from the back, but alas! - cat´s little bighorns started to grow and one of them pointed to glittering treasure. Dick checked it personally - there were nine thousand dollars. And all in this half-abandoned grave-yard.
On the next morning Dick was completely rich. But he still kept quiet. And there was this vile massa, came to him and asketh: "How do you do, you negro scum?" Old Dick made solemn face and answered: "Merry Christmas, massa! How is little massa and little missis, and all de faamly? I feel myself so-so, massa. Neber bery well, but tank God for all his marcies, no worser dan usual!"
"I suppose you are to have a dance there, and a supper too, Dick?" the massa tried.
"Spec so, massa," answered old tricky Dick. "Hear how Isaac, what blongs to massa G, is to be there wi´ his fiddle. Spec how de young folks will get up a dance. Shall hab someping, massa, someping, da say, for keep Christmas."
The Christmas were most important to keep. Bad things not always tempt, and good ones neither. But vicious master said, using old proverbs:
"Ugh, there should be some cowlifting from you last night, some goods were invaded for your Christmas dinin´ table!" And his negro answered immediately:
"O mass Gwin, how can you say dat? Dick no tief. Dick honest nigger. Dick neber teal any ting dat blongs to massa and missis."
Finally, this old Gwine promised:
"Well well well then, I believe you. Here, take this gift, Dick, take those animals gathered some days ago around Rover Hank´s grave and consume them with the other negroes."
Illustration: Priklyucheniya Toma Soyera i Geklberri Finna (TV movie, 1981).
Posted by Aarne Ruben at 3:24 AM